SpiroKit 1 is a smart selection of 66 amines with modulated pKa to help medicinal chemists consider the full potential of the basic centres carefully.

Strong basic centres (pKa > 10) are likely to be fully ionized at a physiological pH of 7.4 and are then unlikely to cross membranes by passive diffusion. Moreover, strong basic molecules are known to lead to hERG toxicity issue, high P-gp efflux and significant binding with α-acid glycoprotein in plasma.

To help you anticipate these issues and make you save time in your research programs, SpiroChem designed the pKa-tuned Amines SpiroKit.

1a Medicinal Chemistry of hERG Optimizations: Highlights and Hang-Ups

In a series of VEGFR-2 kinase inhibitors, control of pKa was of some use in achieving selectivity over hERG. Altering the pKa of the molecule by substituting an N-acetylpiperazine for the pyrrolidine resulted in a 10-fold decrease in hERG activity.

Moreover, activity on the target was maintained and clogP decreased by one log. 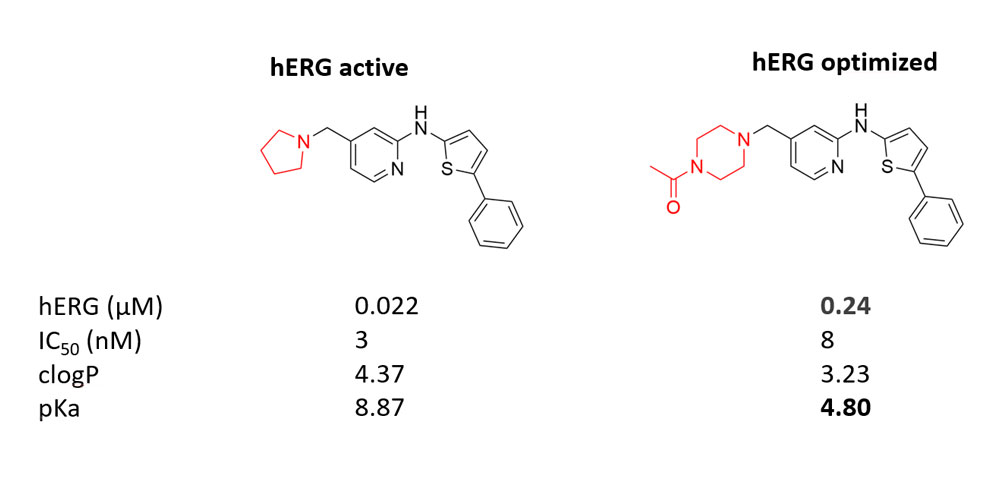 For a type II bacterial topoisomerase inhibitor programme, AstraZeneca researchers needed to optimize a series in order to achieve very low level of hERG activity since high plasma levels of drugs were needed.

The molecule 1 had a favourable profile with the exception of hERG pIC50 of 44µM.
In attempt to decrease it, introduction of fluorine close to the basic center was achieved leading to analog 2 with an improved hERG activity of 233 µM.

This outcome allowed the progression of the compound 2 into phase 1 clinical development.

In the paper, GlaxoSmithKine scientists describe the SAR of a series of tetrahydro-carbazole NPY Y1 antagonists.

The piperidinylmethyl derivative (compound 1) had high affinity but unfortunately showed poor permeability properties in vivo (F*= 0%, B/P** = 0.12). It was hypothesised that the strong basic character of the secondary amine (calculated pKa > 10) was a major contributing factor to the poor pharmacokinetic profile of 1. Consequently, a focused exploration was made with modifications targeting reduction of the pKa of the amine.

As expected, with other parameters effectively constant, a trend towards greater brain penetration was observed with decreasing pKa: for example, the brain/ plasma partitions of compounds 2 and 3 were measured as 4.2 and 8.2 respectively.

Genentech co-workers described the development of a series of inhibitors of dual leucine zipper kinase (DLK, MAP3K12), prominent in the regulation of neuronal degradation. An initial hit 1 was identified following an high-throughput screening campaign of their internal compound collection. Optimization work led to compound 2 with an improved potency detrimental for the lipophilicity value.

A key aspect of the second-step optimization was to reduce the lipophilicity and basicity of compound 2. An oxetane was successfully introduced to reduce the basicity of the key piperidine. The resultant N-oxetanylpiperidine derivative 3 had a limited efflux, important for a brain penetrant, while maintaining good metabolic stability. The bioactivity of this compound was shown in a number of animal models of neurodegenerative diseases.

During optimization of a dihydropyrrole-based series of KSP inhibitors, the variation of the piperidine ring focused on reducing basicity to a pKa in the range 6.5-8.0, which had been determined experimentally to reduce P-gP efflux in a tumor cell line.

Reducing basicity by introducing a fluoroethyl substituent led to metabolic issues as dealkylation occured in rat liver microsomes (RLM) to afford fluoroacetaldehyde which was then oxidized to toxic fluoroacetic acid.

An effective solution was found by deploying the F substituent on the piperidine ring where the effect on pKa was dependent on stereochemical disposition. When the F adopts an equatorial position, that leads to a 2 log10 reduction in basicity from pKa = 8.8 to pKa = 6.6. In contrast, when the F is disposed axially a more modest 1.2 log10 effect on basicity, pKa = 7.6 is observed.

The activation of opioid receptors in peripheral inflamed (acidic) tissue is a promising strategy to reduce injury-induced pain and avoid central and intestinal side effects.

The approach herein aims at reducing ligands pKa by introducing electronegative fluorine atoms in order to promote their selective protonation in inflamed tissue.

The lowest pKa was obtained by introducing a fluorine atom on the piperidine ring.

Analysis of data showed that analogs 1 and 2 had enhanced opiod binding and G-protein activation under acidic conditions and that compounds with pKa values < 7.4 were inactive in noninflamed tissues. Moreover, it appeared that progressively decreasing pKa values correlated with reduced sedation and constipation.

Thanks to the introduction of fluorine atom (especially on the piperidine ring), the authors demonstrated that an opiod ligand pKa value might be used as a discriminating factor in the design of safer analgesics.

High concentration of proteins in plasma and the propensity of numerous drugs to bind to them have led drug development groups to recognize the importance of plasma protein binding (PPB) in modulating the effective drug concentration at pharmacological target sites. The two major drug-binding components in plasma are albumin (human serum albumin-HSA) and α-acid glycoprotein (AAG). It is noteworthy to mention that AAG levels could significantly change in disease/inflammation states.

For example, drugs with pKa > 8 like propanolol, lidocaine or imipramine are highly AAG bounded.

As efficacy may be compromised due to binding to plasma proteins, it is a parameter which must be considered early in the discovery process.

Modulating the molecule pka by replacing basic centres with lower-pKa groups is one of key strategy to alleviate AAG binding.

A selection of 7 azetidine-like derivatives with modulated pKa.

A selection of 9 pyrrolidine derivatives with modulated pKa.

A selection of 12 piperidine derivatives with modulated pKa.

A selection of 6 advanced piperidine derivatives with modulated pKa.

A selection of 8 piperazine derivatives with modulated pKa.

A selection of 4-amino-piperidine derivatives with modulated pKa.

A selection of 3-amino-piperidine derivatives with modulated pKa.

A selection of 3-amino-pyrrolidine derivatives with modulated pKa.

A selection of 6 bicyclic diamino derivatives with modulated pKa.

To place an order please contact Laurence Jung, PhD: laurence.jung@spirochem.com, and indicate the SpiroKits of interest with the required quantities.

Register to be informed as soon as this SpiroKit is released.

Don’t miss out on what is important.