SpiroKit 4 is a smart selection of 30 azaspiro[3.3]heptane derivatives which are viable and promising surrogates for the piperidine, piperazine, morpholine and thiomorpholine rings, commonly used building blocks in medicinal chemistry.

The incorporation of four-membered heterocycles into druglike scaffolds provides an opportunity to uniquely tune the physicochemical and biochemical properties of the parent compound. Moreover, these structures allow the exploration of novel chemical space.

1a Spirocyclic Oxetanes: Synthesis and Properties

1b Synthesis of Azaspirocycles and their Evaluation in Drug Discovery 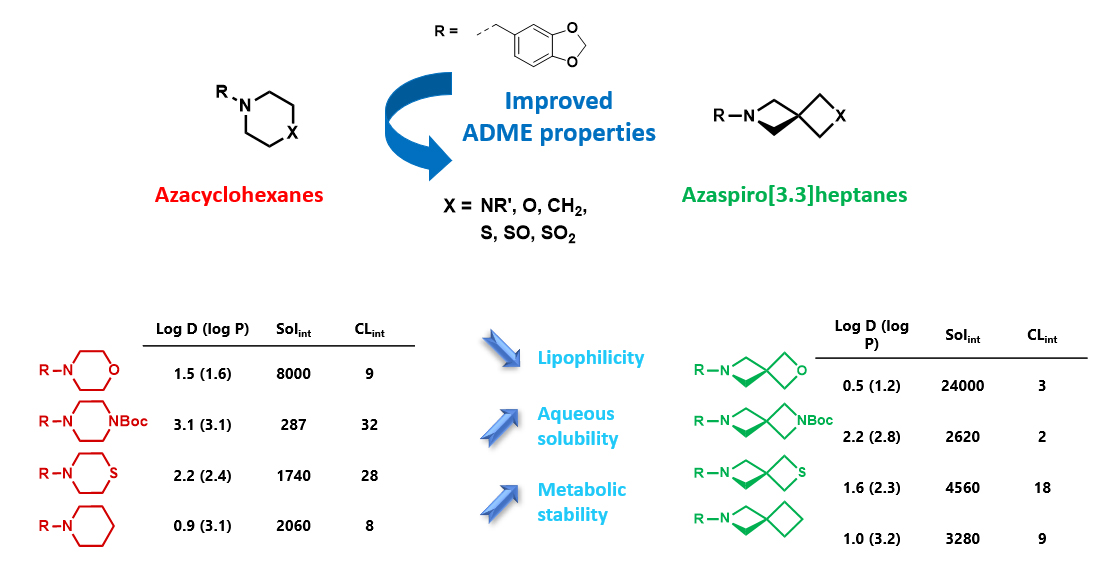 1b Synthesis of Azaspirocycles and their Evaluation in Drug Discovery

Although metabolic susceptibility is dependent on the structural context, and thus cannot generally be attributed on a given structural subunit of interest, it was found that most spiro[3.3]heptane derivatives were oxidatively degraded at lower rates than the six-membered monocyclic analogues in both human and mouse liver microsomes.
As case study, the homospiropiperazine and homospiromorpholine analogs of the antibacterial compound ciprofloxacin were prepared and evaluated.

Moreover, metabolic studies revealed spiroisosters 1 and 2 to have high stabilities, with no observable metabolism in human microsomal assays whereas ciprofloxacin trifluoroacetate shows slight metabolic degradation. Likewise, 1 was as stable as ciprofloxacin in a human hepatocyte assay, whereas the homospiromorpholine analogue 2 remained essentially unaffected under the same whole-cell assay conditions.

Mutated forms of the receptor tyrosine kinase c-KIT are drivers in several cancers and are attractive targets for therapy. While benefits have been obtained from use of inhibitors of KIT kinase activity such as imatinib, especially in gastrointestinal stromal tumor (GIST), primary resistance occurs with certain oncogenic mutations. Furthermore, resistance frequently develops due to secondary mutations.
Imatinib treatment of GISTs with primary mutation has an initial response rate of ~ 70% but acquired resistance develops in 40-50% of cases with an average of two years. The secondary mutation V654A in exon13 is the most frequent resistance mutation post Imatinib. There is a high unmet medical need for development of a safe and specific inhibitor against KIT V654A resistance mutation.
The present invention specifically relates to compounds which inhibit c-KIT kinase, preferably the mutant V654A of c-KIT kinase. The GIST430/654 cell line expressing mutated constitutively active cKIT receptor tyrosine kinase (D560-576 and V654A) was employed for assessing cellular potency of compounds.

It has been demonstrated that the deleterious consequences of inappropriately increased aldosterone levels (in relation to salt intake/levels) can be minimized by aldosterone blockade with mineralocorticoid receptor antagonists. A direct inhibition of aldosterone synthesis is expected to provide even better protection as it will also reduce non-genomic effects of aldosterone as well.

In this patent, Roche’s researchers describe inhibitors of aldosterone synthase that have the potential to protect from organ/ tissue damage caused by an absolute or relative excess of aldosterone.

The compounds are potent inhibitors of CYPB1 1B2 and present an improved selectivity towards CYPl 1B2 versus CYPl 1B1 combined with an improved metabolic stability.

The « Spiro-Switch » from 6-membered rings to azaspiro[3.3]heptanes derivatives gives access to compounds with possible good match of the exit vectors but with core interactions to the target that may be different. 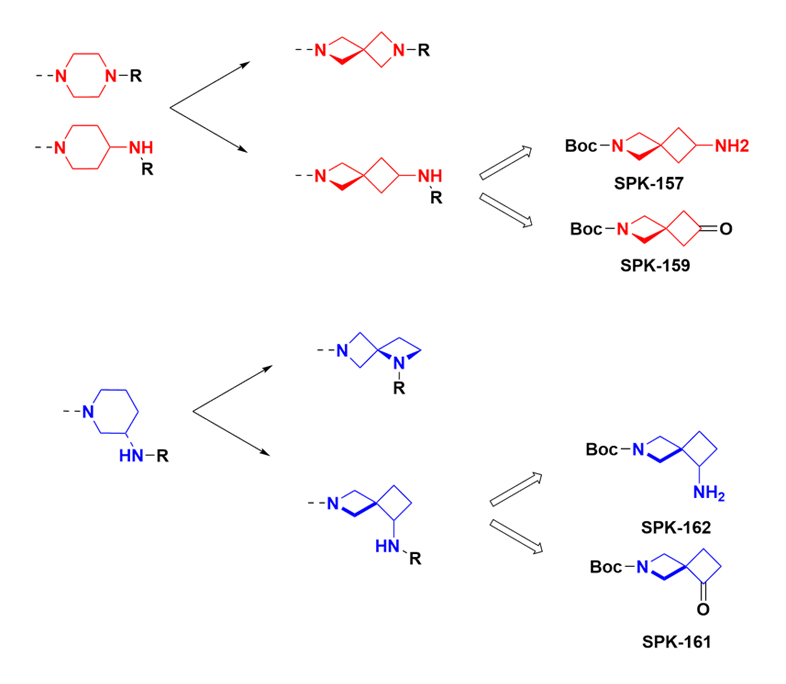 A selection of 2-azaspiro[3.3]heptane derivatives with diversified substituants in position 6 as piperidine surrogates.

A selection of 9 N-Boc protected 2-azaspiro[3.3]heptane derivatives with an handle in position 6 or 5.

A selection of 6 diazaspiro[3.3]heptane derivatives as piperazine surrogates.

Don’t miss out on what is important.